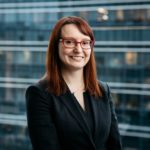 Welcome our two newest Intellectual Property team members to the Firm, Angela Keuling and Chris Peng! Angela will be joining our Edmonton team as a Patent Agent and you can find Chris working out of our Calgary office as an Associate.

Angela is a registered Canadian Patent Agent, handling the drafting and prosecution of patent applications. She has experience with inventions in a variety of technical fields including life sciences, chemistry, oil & gas, industrial sensors, pulp & paper, and others.

Prior to joining Parlee McLaws, Angela worked for eight years in intellectual property (IP) management in both industry and government, including at a biotechnology company, a small start-up, and at Alberta Innovates-Technology Futures (now Alberta Innovates). She gained experience developing and implementing effective IP strategies aligned with commercialization pathways and business needs.

Angela completed her PhD in Medical Sciences (Medical Genetics) at the University of Alberta, specializing in the genetic pathways involved in malignant skin cancer. She has received over 25 academic awards and published over 15 scientific papers and abstracts.

Chris’ practice is focused on intellectual property law. Prior to joining Parlee McLaws LLP, he was a corporate lawyer specializing in securities for over ten years. Chris worked at two national law firms and at the Alberta Securities Commission, including as a member of a national initiative dealing with fintech businesses and cryptocurrencies.

During his legal studies, Chris received an award for obtaining the highest mark in his patent law course and attended the International Intellectual Property Law Summer Program at the University of Victoria.

The Legal Steps to Startups: Incorporating Basics for Startups and Small Businesses

The Legal Steps to Startups: Incorporating Basics for Startups and Small Businesses Incorporating a company sounds simple, but there are some important things you need to consider when deciding whether to incorporate, and what that incorporation will look like. Parlee Associate, Laura Perram walks you through what you need to know before you start thinking […]

The Legal Steps to Startups: 3 Things You Need to Know About Trademarks

The Legal Steps to Startups: 3 Things You Need to Know About Trademarks Trademarks. What are they? Why are they important? Follow along with Associate Richard Schaub and learn how registering a trademark could impact you and your business. Do you have legal questions about your startup or small business? You can reach out to […]

Protecting Your Brand! The Power of Registered Trademarks for Small Businesses and Startups

Written by: Richard A. Schaub You did it! You took what started as an idea, a passion, or even a dream, and made it into a business. As your business has grown you may have started asking yourself how to protect the brand you worked so hard to build. A great place to start is […]